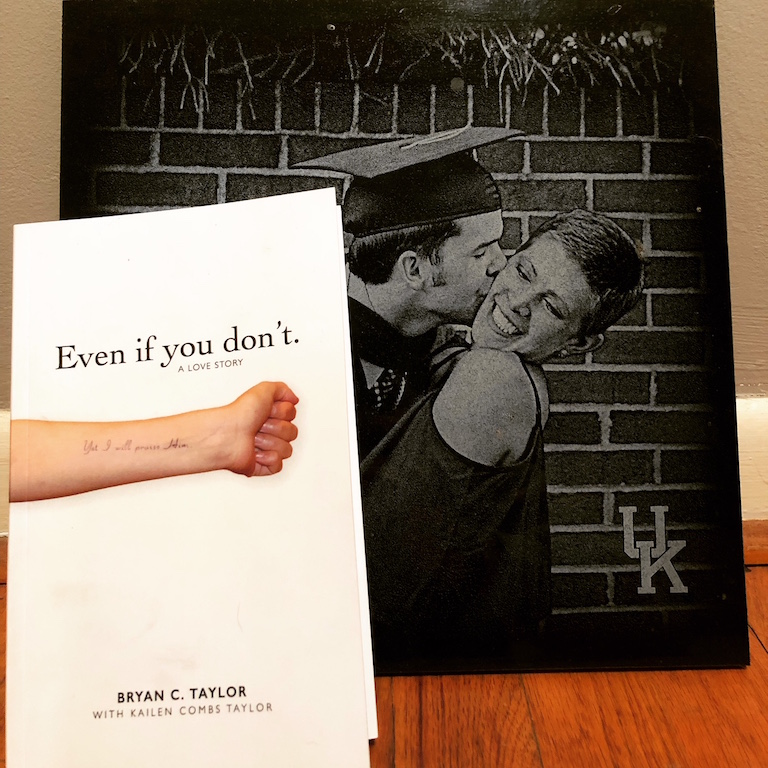 Confessions of a Widower

By Guest AuthorFebruary 26, 2018No Comments

When you open my book, Even if You Don’t, you’ll find it has four parts. Part One is called The Hand and the Heart, Part Two is The Bend in the Road, Part Three details The War, and Part Four is titled The Gloaming.

What you won’t find is Part Five – The Wasteland.

The wasteland has become an indelible element of my humanity; it has coiled itself so intimately into the substance of my life that I am no longer able to separate friend from foe, truth from fiction.

In short, the wasteland invaded my identity. This excerpt from an unpublished blog post, written over two years ago, illustrates that point:

It was as if I had packed up my things and moved into a pseudo-reality, surrounded by lifeless statues. My friends had somehow become foreigners; my family felt estranged. My whole world and everything in it had turned to stone. And with time, an icy layer has formed on that now-unwavering granite, rendering it treacherous and cold, inaccessible to my trembling hands, my wandering mind, and my desperate heart.

But just as I start to scream for help, to cry out into the deep recesses of the night, I remember the painful truth behind the riddle of it all: It’s me.

I am the foreigner; I am the stranger. It is my humanity that has hardened and frozen over. For the wasteland is not simply the world I now inhabit, but in all actuality the world that exists inside of me.

I wish I could sit in front of my computer today and tell you I’ve escaped, that I’ve finally evaded the wasteland’s hungry clutches, but I cannot and will not lie to you. I am still here, a cold stranger walking among the stones.

But even though the wasteland catalyzed my loneliness and bent my grief journey into a tortuous, serpentine trail, it has also taught me many lessons. And that is the purpose of this post – to share what I’ve learned along the way, and to help you navigate your own version of the wasteland.

It was a savagely honest depiction of my experience as a widower – a harsh, unfiltered, profane delineation of my existence since my tragedy. Removing it was difficult. Frankly, there was good writing in it. But more importantly, it conveyed a crucial message to all grievers:

For the surviving loved one, the story doesn’t end when grief begins.

You may be asking yourself, If the writing was so good and the message was so important, why did he take it out of his book?

As it turns out, that is a formative question. My initial answer was that the brash, somewhat vengeful, nature of the content distracted from the overall message of the book. And while that is certainly true, it is neither the whole answer nor the best answer.

To clarify, my wasteland has its origins in the stark disapproval of my friends. I gave a truncated introduction to this topic in my previous post, http://bryanctaylor.com/when-grief-causes-guilt/, where I discussed the paralyzing power of recovery guilt. I also mentioned what I perceived as Kailen’s dying wish – her imploration that I keep living after she was gone.

My first tangible attempt at granting her wish was my decision to start dating again. I briefly elucidate that decision, and the resultant consequences, near the end of Even if you don’t.

It took courage to heed that admonition, to pick myself up and try again. I didn’t want to; it was the harder choice. It would have been far easier to curl up in a ball and protect myself, to accept that my time in the sun was over and live out the rest of my days as a recluse. But that would have dishonored her; it would have disregarded her final request.

So, I made the hard choice. And got crucified for it.

Crucified is a strong word, but after thorough deliberation, I find it to be appropriate. The social and emotional fallout from my decision was cataclysmic. Within a matter of weeks, my entire life collapsed on itself. Trusted friends turned their backs, accused me of being selfish, of moving too fast, acting impulsively, and in some cases, outright told me I was dishonoring Kailen’s memory.

I will not give direct quotes nor will I espouse the notion that my friends are bad people, because they are not. They did, however, crush my hope that life could ever be normal again. They told me Kailen would never approve; they said the timing was wrong; they said I was dating the wrong person. But in the absolute worst cases, they said nothing at all.

Kailen and I once had a large group of mutual friends, and as of the time of this writing, very few of them speak to me. The ones that do seem distant, almost guilty, like they’re consorting with a villain.

If you’re a widow or widower, or any griever for that matter, it’s likely you understand the emotion I’m describing. In our time of deepest vulnerability, it is our loved ones that possess the greatest power to harm us. They won’t know what to say, they may accidentally make an insensitive remark, or in some cases, they may turn vicious. Or worst of all, as I experienced, they may voice their disapproval with cold shoulders and silence.

If this is happening to you, I’m very sorry. It’s tough to imagine a greater emptiness than losing a loved one through death, then losing your living loved ones through disapproval. If you feel anger or resentment toward these people, it is normal and justified. But trust me when I tell you that anger and justification will not lead you home.

Instead, I want to introduce a radical idea, an epic plot twist:

It’s not their fault.

Yes, you read that correctly.

It took me months, even years, to arrive at this truth, so don’t be surprised if you don’t believe it right away. Also, please understand I’m not condoning the actions of my friends, or yours. I’m merely sharing with you what God shared with me.

Their actions are wrong, but I believe the impetus behind those actions is outside their control. I find that society has conditioned us to expect specific outcomes, especially as it relates to love stories. When the expected outcome doesn’t occur, we are dissatisfied and tend to act out.

I know this is an abstract idea, so allow me to speak plainly for a moment. I have a theory on this subject, which I call The Dichotomy of Love Story.

This is the foundation of that theory:

We all love archetype. Unbeknownst to most of us, books and cinema have taught us to crave archetypal narratives, to be unsatisfied with any story that breaches those long-established boundaries.

Love stories are the best example – in almost every romance since Shakespeare penned Romeo and Juliet, the story has ended in one of two ways: the first being the quintessential happily-ever-after, usually marriage or a sunset ride, and the second being physical death or some form of permanent separation, the purest form of heartbreak.

I beseech you to find a mainstream novel, movie, or television show that doesn’t conform to this standard. A good example is author Nicholas Sparks. Every one of his books have been New York Times and International Bestsellers, amassing a grand total of more than 100 million copies sold. By all accounts, Sparks has had staggering success, the kind of career every author dreams about. Why? For one, he’s a darn good writer. But having read all of his books, I can assure you he has an enduring appreciation for the power of archetype.

My and Kailen’s story was Sparksian to its core. We fell in love when we were young, our bond was tested by a horrific cancer diagnosis, and the resultant fight was noble and brave and forged our youthful affections into something far more enduring.

I have no doubt that our loved ones were heartbroken when Kailen died. They were enthralled by the story and the story ended. They loved Kailen and she was gone. They mourned the loss of their protagonist, felt sincerely justified in their grief, but in a completely non-morbid sense, found themselves satisfied.

Our story was a tragedy, but it fit the archetypal mold.

That is, until I chose to keep living.

In Hollywood, love ends in one of two ways. In real life, the story is messy.

Let me repeat the message of Part Five again:

For the surviving loved one, the story doesn’t end when grief begins.

Your life is not a Nicholas Sparks novel, no matter how badly your friends and family may want it to be. When I broke and violated the archetypal narrative by choosing to date again, my friends broke and violated me. It’s likely the same thing will happen to you. For many of you, it probably already has.

But regardless if you agree with my theory or not, I encourage you to extend uncommon grace to your loved ones. When they say and do unconscionable things, be quick to forgive them.

Be unyieldingly empathetic, and remember that you’re not the only one grieving. Their grief timeline conflicts with yours and yours conflicts with theirs, but both timelines matter, just as both people matter.

And never forget – you are not horrible just because something horrible happened to you. Your tragedy is not your identity.

So keep living your story, and live it well.